You feel strange and uneasy…

Within the seemingly infinite river of independent titles that try to sell themselves on the 1980s retro-style, nostalgic look, there are a few hidden gems that shine through and make a lasting impression on me, and even with it’s shortcomings that stop it from being great, that’s exactly what happened with Odallus: The Dark Call.

Odallus is, for all expense and purposes, a love letter to the platformers and Metroidvania games of old, particularly Castlevania and Ghouls n’ Ghosts. Even aspects like the world map, the amount of detail put into the sprites and overall enemy design really makes me imagine a person with a time machine that brought some scrapped game ideas from the 80s and brought them over to the current time to make a full game out of them.

There is something written…

You start the game off with our protagonist Haggis, who had the misfortune of having his village burned to the ground by villains that wish to become the new gods of the world, because apparently the older gods just couldn’t bother anymore or had to go play ping-pong at a frat party or whatever. Beyond that, there really isn’t much I can say, not because of spoilers, but because I found the overall story to be quite sparse, vague and uninteresting. Most of the dialogue comes from small talk with the shopkeeper and a few sentences exchanged between yourself and the many bosses you fight in the game. There are many stone tablets hidden around all of the levels that expand on the lore of the world, which are very welcome to make the game feel more alive, but my same comments still stand. I never found much interest in this story, for the gameplay has almost completely overshadowed the narrative for me.

Right off the bat, the controls feel just right. The tightness and responsiveness are great for what the game wants to be and perfect for a young man like myself who never grew up in the much reminisced-upon NES era of video games, so this is as close as I’ll probably get to that feeling. Due to technical limitations on my end, I was not capable of plugging in a gamepad, so I was forced to play with a keyboard, whose default button placements I found to be very uncomfortable. Fortunately, I was able to rebind my keys through the game’s launcher, which made a world of difference to me, and would’ve probably affected this game’s review score if I were not able to do that. Even then, it is very obvious that using a proper gamepad is the way that the game is meant to be played and I highly recommend you do so.

I also recommend that you check the launcher to see what all of the buttons actually do, for when you start up the game, in good ol’ fashioned NES style, you start to move almost immediately with no tutorial and no indication of where you’re suppose to be going. It is up to you to actually be curious enough to try everything out and explore as much of the levels as you can, since there will always be alternate paths for you to explore, with some of them taking you to a different level entirely. 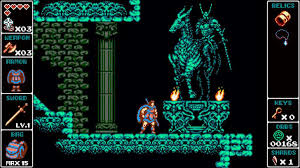 The encouragement of exploration is very important in a game like Odallus, since you are free to play the game in a linear fashion, but that’ll only take you so far before you get walled off and have to backtrack to find all of the secret levels hidden within the places you already went to. Some areas require a certain item to be able to access the secret level located in a completely different area from where you currently are.

This is both good and bad, since I really love how the game expects you to always use your head and figure everything out with practically zero help, but that also means that I find myself retreading the same level four to five times just to find the one tunnel that takes me to a different area, only to find that I don’t have the item I need to continue on that path, which means I have to exit the level, go somewhere else, find the item I need, come back, re-do the level to get to the same point and then use the item to access the secret that is required for me to discover in order to progress further. Not much of a “secret” area when I’m actually required to find it in order to beat the game.

Another thing that really puts salt in the wounds is the games frustrating checkpoint system. As I said, this game take a lot of inspiration from old platformers, so there is significant level of difficulty right from the start. Even with all the items and equipment you find, the enemies always tend to step up their game. Knowing this, you might want to do your best to stay alive, since there are some pretty scarce checkpoints sprinkled around the levels. If you die, you lose a life and get sent back to the last checkpoint you touched, you matter where you are. If you die and lose all of your lives, you have to restart the entire level from the very beginning, and many of these levels are huge, which made me “Ugh! Come on!” out loud more than a couple of times.

However, in its defense, the levels tend to remember important things you’ve already done, like defeating bosses and opening locked doors, so there’s no need to do that again. But, unless you’ve discovered a shortcut, you have to walk all the way back to where you were while trying to avoid any cheap shots from the enemies along the way. With that said, I was still having a lot of fun trying to figure everything out and found the result of my hard work rewarding.

It is always a joy to discover a new level or arrive in an enclosed space, in similar Megaman fashion, in order to face off the many diverse bosses that ended up being a highlight to my experience. Many of them pose a good challenge without them being too hard. Just like most of the game, these bosses encourage using your head instead of button mashing your way through the whole thing. Even without that, simply looking at their designs were a delight, with many of them being reminiscent of Metroid, Axiom Verge and even Dungeons and Dragons. That accompanied with a very well made, memorable soundtrack and the game’s good use of color made for an exciting and rewarding experience.

If there were any other downside to the game, it would probably be its length, although even that I put into question. I’ve played the game for almost 6 hours and I am already in the final level, though I feel like that’s a good, healthy length for an indie exploration title. If it was any longer than 10 hours, I would’ve probably gotten tired of it and stopped playing until I had my fill, but because it’s so short, I was able to get through all of it and get all of the satisfaction I needed from it, which I think is better than unnecessarily padding the game out to justify the $15 price tag. I think that is a fair price, and any regular ol’ Steam sale should be a further incentive to purchase the game, for I think it’s a fun ride, even though there are a few things that hold it back from being a great game.

This game does to the original Castlevania as how Axiom Verge does with Metroid: a huge callback and labor of love to what made their respective inspirations great, mixed with influences from other old games in order to make the experience more fresh. It carries some antiquated ideas with it, but it’s a minor issue in comparison to the fun gameplay, exciting boss fights and beautiful art direction, with a pretty memorable soundtrack to boot. If you even have a molecule of interest in this game, I feel it is well worth the purchase for this brief, but solid adventure.

Why EPIC May Actually be Steam’s First Real Rival

Why EPIC May Actually be Steam’s First Real Rival