30-Day Anime Challenge!  (Day 30):  An Anime You Wished Never Ended And Continued On

THE QUESTION THAT WILL END ALL QUESTIONS.

IF YOU CAN WISH FOR AN ANIME TO NEVER END…….WHAT WOULD IT BE?

AND OF COURSE MY ANSWER IS……

Yeah yeah I know what you guys are probably thinking, but hear me out first, ok?

I know that there are a ton of anime out there that would warrant an exponential increase in the number of episodes, i.e. Black Butler, Ouran High School Host Club, and Hyouka, just to name a few.

I also understand how shows, like the three I mentioned, would benefit from more episodes; taking into account their episodic fun-factor and the interesting cast, among many other things.

HOWEVER, no anime should fall under the curse of eternal existence (damn, that sounds pretty cool).

Because, in my opinion, every show has to end, no matter how good it is.

This scene is one of the many testaments as to why an anime’s ending is uber important.

It doesn’t matter what kind of setting you have, or how interesting your cast is, or how fun-filled you can make the plot:  eventually, ideas will run out dry, and so will the charm of the anime.

Given my human constitution, I don’t have the longest attention span, and I’m sure no human can endure viewing the same show over and over again.  Ergo, if I had to watch an anime that never ever ends, ever, then I might just consider committing seppuku at some point during my viewings, because to continue on and on and on and on and on and on until the end of all living matter in the universe is WAAAAAAY BEYOOOND human temperament. 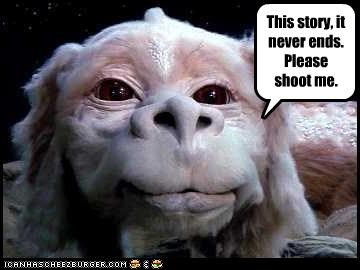 That’s why I make it a habit to appreciate an anime when it ends.  It marks the tying of the silk ribbon over the wonderful gift that the anime has packaged for you during its run.  Or it can also mark the release of the restraints from watching such a banal show that has held you in a stranglehold for hours and hours on end.

Either way, the ending of every anime is an important factor in one’s overall enjoyment, and to deny that factor is like trying to assemble the TARDIS without the central console or the swoosing noises, or creating a jam-filled donut without the jam, or trying to build a CPU without a functioning motherboard (yeah I know you guys can make better similarities).

As a great anime reviewer once said:  “The ending is paramount.”

The only thing we can do is appreciate an anime for what it is, how it started, how it went through its run, and how it ended.

Although, real talk though:  I would like to see what would happen if Boku no Pico never ended.

HAS IT REALLY BEEN 30 DAYS?

Ok, a little bit of a nerdish rant here, sooooo you can skip this part if you want to……….

SO this whole 30-Day Anime Challenge thingy is my way of celebrating my first year here at Buttonsmashers (sorry, THEButtonSmashers).

And boy do I owe it to a lot of people.

Well, I would like to start by thanking everyone who has assisted me throughout my first year as a member of the Buttonsmashers family.  It feels incredibly surreal that I started over a year ago, and now, looking back, I feel that being an editor for this wonderful site has given me new experiences that I treasure and will certainly be a highlight of my life.

I’d like to thank our editor-in-chief, Qudduws Campbell, for being the most supportive big-brother that I never had.  I appreciate every single piece of advice and assistance that you have provided, and continue to provide, over the first year I’ve been a part of the site.

My thanks also go to my co-editor, who have been welcoming me with open arms and who made me feel part of the family almost instantaneously.

And finally, I would like to thank YOU GUYS for supporting what I do here.  Seeing how my work has been noticed makes everything I do worth it, and I would like to express my deepest gratitude for making my experience as an anime reviewer all the more worth it.

YOU GUYS ARE AWESOME.

Well, that’s it for now.  Don’t worry, because after a slight break, I will be back with a new review in tow, and then another special article for you guys.  There might also be additional stuffs in between, so make sure to watch out for those.

As per usual, leave a comment down below pertaining to your thoughts on this topic, on the shows mentioned, or if you would like me to review or make a discussion about anything.  And, speaking of liking, give the article a thumbs-up if you enjoyed it.

Aaaaaaaand with that, I bid you all adieu. Until next time, this has been Kenji from Prince Kouhii’s Anime Reviews, and I’ll see you guys in the future.

Here’s to another amazing year with you guys.