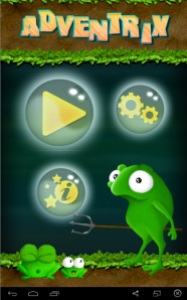 So, this month will be filled with GBA goodness. But let me start with a quick article about an Android game I was asked to review. I had to push the review back and back because I was busy and I had other articles planned. In any case, I think it’s time to give this a honest review. But because this is a small game, I don’t think it can have a full blown 1000-ish word long review. That’s why I do a quicky on this. With my new format 🙂

I have this thing in my personality… The thing is that I’m quite polite. So, I wanted to thank the developer to give me this chance to review their game. While my critique / review can rip some games apart, I always try to do it with respect for the developer.

They gave me a review copy of this game and they told me that they were a small indy company working together on this game. Because this is their first game they wanted to make sure it’s good so that they can do these kind of things in the future. 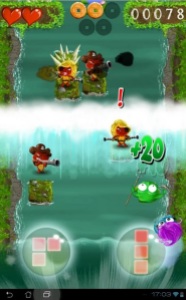 This game is rather nicely put together. It’s quite clear that this game had a lot of care and thought put behind it. For a couple of people, the quality is pretty nice. The gameplay is also quite unique and are fun to play with.

It’s exactly what it says on the tin, it’s a Tetris-ish puzzle game.

The music that plays in the background doesn’t put the right mood. It plays some Scottish sounding music. This doesn’t put you in the mood of playing a sort of Tetris game at all. At least in my opinion. At least it isn’t a cheap Tetris remix and they created original music. It deserves a “meh” because it isn’t really fitting.

Visually, the game looks and plays quite nice. But the enemy design just looks silly to me. The small alligators just don’t click with me. Maybe they should change it to the natural enemies of the frog? That way you can sneakily educate players on frogs.

In every level you get one additional hit, for some reason. But you can’t see if you used up that hit or not. That is pretty lame.

Also, sometimes I wasn’t able to move my Tetris pieces just right. Because there isn’t a tutorial, it isn’t clear how to move the Tetris pieces around.

Guys, it’s quite nice to show you my score, but could you please just show a highscore list then? Since now the score is just kind of there, serving no purpose.

So, if you ask me, this game is worth it. While it’s not perfect, it’s quite enjoyable to play. The price isn’t wrong too. For one buck, this is something that you won’t regret buying.

I have a good feeling that the developers of this game are going to add more levels and content so, about the current short state of the game… I’m totally not worried about it. The advice I’m giving them is that the game needs some additional polish. I think the best idea is to do that while you release new levels. Otherwise it might get stale to others.

Anyways, I think I’m going to leave it here for this quicky. Thanks for reading and I hope you enjoyed. The next article will be my first in the GBA month. So, get hyped.

How To Fix Pixel 6 Not Updating To Android 13

How To Fix Pixel 6 Not Updating To Android 13