own and have played a lot of Pokémon spin offs. When I was browsing the Nintendo 3DS eShop earlier today, I thought it would be a fun idea if I wrote an article about them. Since I keep my articles around a 1000 – 1500 words, I might write more then one article. So, let’s get started talking about the Pokémon spin-offs. Also, I’m not talking about rom hacks. Since I wrote an article about those in the past. And as usual feel free to leave a comment with your opinion on the games and or the content of this article.

If you watched the first season of the Pokémon anime, you might remember that emotional scene where Ash decides to leave Pikachu behind with other Pikachu’s. That feeling of leaving a friend behind is the exact feeling each and every ending gave me in the Pokémon Mystery Dungeon series.

While the games aren’t perfect if you compare them to other similar games, I think they are the best spin-off games in the Pokémon series. I wish that this series got a bit more love. If you want proof that I love this game series, you might want to read my quite in-depth review of the “Gates to Infinity” entry.

So, if anybody from ChunSoft or Nintendo is reading this article, please make more Pokémon Mystery Dungeon games. How you are currently making them, they are nearly perfect. Anyways, I think I better stop talking about this series since I wanted to write this article mostly to give some other spin-offs some time to shine on my blog.

When I was young, my mom took me to a clothing store. As a young child, I would usually bring my gameboy along. Yet, in that store there was a pinball machine that kids could play FOR FREE. Yes, you read it right, no coins or anything, it was a free pinball machine.

When I got home, I started to look through my gameboy games and found this game back. I rarely played it but since I saw that free pinball machine I wanted to play it at home as well. In the Pokémon Pinball series, there are only two entries. Which is quite a shame. But they aren’t the only Nintendo-themed pinball games. There is also one of Mario, Kirby and even Metroid.

If you have the chance, I would pick this one up. If you play it on the Super Gameboy, a SNES addon, the blue board will actually appear red. I used to have a picture of that, but I think it was taken with a potato, so I will spare you the cruelty of it.

I have talked about this series in the past. I have written an article about the first game in the series. I had a lot of fun with that game, and honestly I still have. It has been quite some time since Nintendo released a new entry of this series.

At first, you might think that this game is nothing more then simply drawing circles, but it’s more then that. It’s a puzzle game and it makes you look in a different angle to Pokémon. Now they are actual helpers to finish your quest instead of helpers in battle.

I mentioned most of my complaints in my first impression article, so I won’t give a long explanation here. It can be repetitive yet it’s so much fun to play. Also, when you look at the later games in the series, you see it clearly evolve into an amazing game. The latest game in the series is one of the best entries ever.

I advice people who where on the fence for this series to give it a try. Read some articles about it. I enjoyed myself with it. The difficulty can be a bit off, but hey, at least it’s something different from the main Pokémon formula. 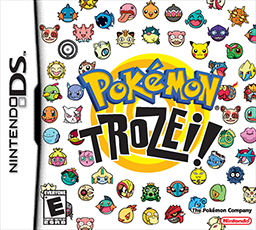 The biggest issue this game suffers from is that the story just seems so well, created just for the sake of having a story.

While I’m totally not a fan of the latest free game that they released, I think the puzzle Pokemon games where all pretty amazing. When I’m bored, I sometimes start playing these games. And the time flies by. It’s one of those games that “one more round” really applies.

A big negative of this game is that you are expected to know which Pokémon has which type. If you have that knowledge, some bosses are way more easy to defeat.

A big positive in this game is that when fighting a boss-Pokémon, it will come inside your playing flied and remove some columns. You will have to adapt a new strategy and quickly, since those attacks can hurt quite a lot.

I wouldn’t recommend this game or this series to anyone. I would recommend it to hardcore Pokémon fans, casual gamers and puzzle game fans. Otherwise, this game is a safe one to pass. I’m not saying that these games are bad in any meaning of the word, but they aren’t for everyone.

I almost forgot about this series. While I was about to write the closure to this article, I saw this game sitting on my shelve. These games are quite something.

This game is a more relaxing Pokémon game where you need to make friends with the Pokémon of an area before you can progress to the next one. The way you can befriend a Pokémon is by a race, hide-and-seek, quiz, quest or a battle.

During your adventure, you will get different Pokémon in your party that have different abilities in battle and in exploration. Also, the party games make for quite a nice time.

If you have a young child that loves Pokémon, I urge you to buy this game for them, I’m quite sure they will enjoy this one. I’m still playing the sequel of this game and it’s a lot of fun. When I am in the mood again to play on my Wii, I’ll most likely try to finish PokePark 2.

Well, I have talked about most of the spin-offs I played. It’s quite clear that I haven’t played some big ones, but I’m planning to change that in the future. I hope you found some new Pokémon spin-offs that seem interesting to you or maybe you enjoyed reading my opinion about a Pokémon spin-off you played.

In any case, I might write a sequel to this article if I played some other Pokémon spin-offs that I find worthy to be talked about on my blog. I hope you enjoyed reading this article and I hope to be able to welcome you in another article on my blog. Until then, take care!